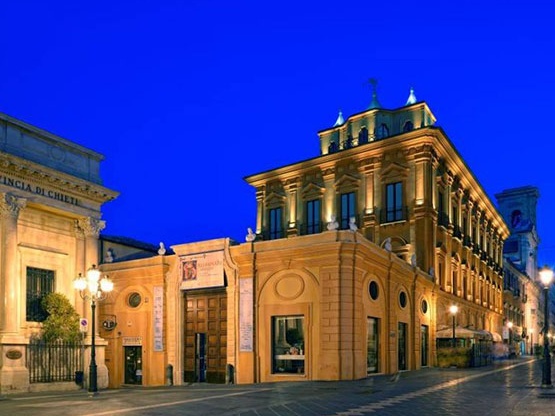 The project consisted of replacing an old video surveillance system (very expensive in terms of maintenance), with 63 Provision-ISR AHD cameras (model I3-340AHD36, I4-340AHDVF, I4-350AVF and I3-350A36) connected to 5 sixteen channels DVRs model SH-16200A-5(1U).
The 5MP cameras, guarantee a much better visualisation and allow the user to configure intelligent analytics functions.
The DVRs were installed in 3 different racks using the existing customer’s infrastructure and VLANs were created to separate the networks.

Palazzo de’ Mayo is a monumental building of extraordinary value that stands in the old city of Chieti. A sixteenth & eighteenth century palace with noticeable dimensions and significant architectural and artistic impact in the urban reality of the city.
Over the centuries, the building has undergone amalgamations of more housing units, from which a unit building complex of great consistency and quality was generated. Purchased by the Foundation Carichieti, the building has been the subject of a major restoration work which was started in January 2007. This restoration returned the city of Chieti, one of the best existing examples of Baroque art in the Abruzzo region. The multifunctional character attributed to the building complex is crucial for the revitalization of the entire old town, in consideration of the palace’s cultural and the social role which is of paramount importance.
Palazzo de’ Mayo, in fact, can be considered a “Citadel of culture” comprising of the art library, the auditorium, the museum and some rooms devoted to temporary exhibitions, making it A cultural center of extraordinary interest beyond the territorial boundaries.