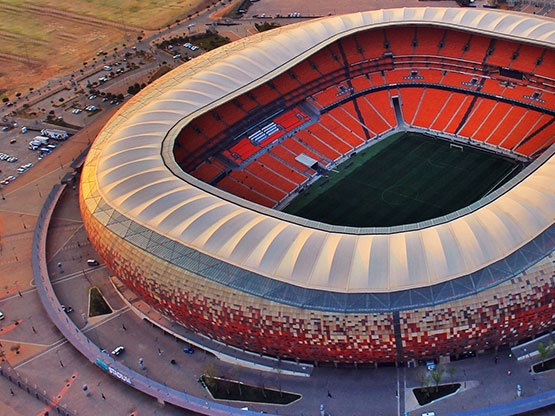 The installation company landed the contract to replace 20 PTZ cameras around the entrances to the stadium: The so called: “Ring of Fire”.
The goal was to monitor crowd and traffic movement at a distance of up to 1000m with close-up views of the security checkpoints and turnstiles/entrances to the stadium. The installation company removed the existing equipment and secured the new Provision-ISR equipment on the 100mm posts. They used thinner posts in order to reduce problematic blind spots from the previous installation.
In the first phase, the installation company installed five 2MP 30X UltraZ IP PTZ cameras, 2 thirty two channels NVRs featuring the latest software and 6x 6tb hard drives. The complete installation will also include NVRs featuring facial recognition capabilities, but this part of the project will manifest with the process of replacing 420 cameras inside the stadium (including a mix of static and PTZ IP cameras).

The Customer (National Stadiums PTY LTD) was very impressed with the picture quality and zoom capabilities of Provision-ISR cameras, enabling the event management team to monitor highways, train station and parking lots.
Thanks to the new CCTV system, they can also follow the movement of patrons at close quarters and implement the necessary measures to ensure proper crowd control.

First National Bank Stadium , also known as “Soccer City” and “The Calabash”, is a stadium located in Nasrec, bordering the Soweto area of Johannesburg, South Africa. It is located next to the South African Football Association headquarters where both the FIFA offices and the Local Organising Committee for the 2010 FIFA World Cup were housed. Designed as the main association football stadium for the World Cup, the FNB Stadium became the largest stadium in Africa with a capacity of 94,736. However, its maximum capacity during the 2010 FIFA World Cup was 84,490 due to reserved seating for the VIPs and the press.